A curated list of delightful Unicode tidbits, packages and resources.

Unicode is Awesome! Prior to Unicode, international communication was grueling- everyone had defined their separate extended character set in the upperhalf of ASCII (called Code Pages) that would conflict- Just think, German speakers coordinating with Korean speakers over which 127 character Code Page to use. Thankfully the Unicode standard caught on and unified communication. Unicode 8.0 standardizes over 120,000 characters from over 129 scripts – some modern, some ancient, and some still undeciphered. Unicode handles left-to-right and right-to-left text, combining marks, and includes diverse cultural, political, religious characters and emojis. Unicode is awesomely human – and ultimately underappreciated.

What Characters Does the Unicode Standard Include?

The Unicode Standard defines codes for characters used in all the major languages written today. Scripts include the European alphabetic scripts, Middle Eastern right-to-left scripts, and many scripts of Asia.

The Unicode Standard further includes punctuation marks, diacritics, mathematical symbols, technical symbols, arrows, dingbats, emoji, etc. It provides codes for diacritics, which are modifying character marks such as the tilde (~), that are used in conjunction with base characters to represent accented letters (ñ, for example). In all, the Unicode Standard, Version 9.0 provides codes for 128,172 characters from the world’s alphabets, ideograph sets, and symbol collections.

The majority of common-use characters fit into the first 64K code points, an area of the codespace that is called the basic multilingual plane, or BMP for short. There are sixteen other supplementary planes available for encoding other characters, with currently over 850,000 unused code points. More characters are under consideration for addition to future versions of the standard.

Character encoding standards define not only the identity of each character and its numeric value, or code point, but also how this value is represented in bits.

UTF-8 is popular for HTML and similar protocols. UTF-8 is a way of transforming all Unicode characters into a variable length encoding of bytes. It has the advantages that the Unicode characters corresponding to the familiar ASCII set have the same byte values as ASCII, and that Unicode characters transformed into UTF-8 can be used with much existing software without extensive software rewrites.

UTF-16 is popular in many environments that need to balance efficient access to characters with economical use of storage. It is reasonably compact and all the heavily used characters fit into a single 16-bit code unit, while all other characters are accessible via pairs of 16-bit code units.

UTF-32 is useful where memory space is no concern, but fixed width, single code unit access to characters is desired. Each Unicode character is encoded in a single 32-bit code unit when using UTF-32.

All three encoding forms need at most 4 bytes (or 32-bits) of data for each character.

The Unicode characterset is divided into 17 core segments called “planes”, which are further divided into blocks. Each plane has space for 65,536 (2¹⁶) codepoints, supporting a grand total of 1,114,112 codepoints. There are two “Private Use Area” planes (#16 & #17) that are allocated to be used however one wishes. These two Private Use planes account for 131,072 codepoints.

The first plane is called the Basic Multilingual Plane or BMP. It contains the code points from U+0000 to U+FFFF, which are the most frequently used characters. The other sixteen planes (U+010000 → U+10FFFF) are called supplementary planes or astral planes.

Surrogate pair: A representation for a single abstract character that consists of a
sequence of two 16-bit code units, where the first value of the pair is a high-surrogate
code unit and the second value is a low-surrogate code unit. Surrogate pairs are used only in UTF-16. (See Section 3.9, Unicode Encoding
Forms.) — Unicode 8.0.0 Chapter 3 – Surrogates

The Unicode character 💩 Pile of Poo (U+1F4A9) in UTF-16 must be encoded as a surrogate pair, i.e. two surrogates. To convert any code point to a surrogate pair, use the following algorithm (in JavaScript). Keep in mind that we’re using hexidecimal notation.

Unicode includes a mechanism for modifying character shape that greatly extends the supported glyph repertoire. This covers the use of combining diacritical marks. They are inserted after the main character. Multiple combining diacritics may be stacked over the same character. Unicode also contains precomposed versions of most letter/diacritic combinations in normal use.

The Unicode Consortium published a general punctuation chart where you can find more details.

Wait a second… what did I just read?

Variable identifiers can effectively include whitespace!

The U+3164 HANGUL FILLER character displays as an advancing whitespace character. The character is rendered as completely invisible (and non advancing, i.e. “zero width”), if not explicitly supported in rendering. That means the ugly character replacement (�) symbol should never be displayed.

I’m not yet sure why U+3164 was specified to behave this way. Interestingly, U+3164 was added to Unicode in version 1.1 (1993)- so the consortium must have had a lot of time to think it through. Anyway, here are a few examples.

**NOTE:** I’ve tested U+3164 rendering on Ubuntu and OS X with the following: `node`, `php`, `ruby`, `python3.5`, `scala` ,`vim`, `cat`, `chrome`+`github gist`. Atom is the only system that fails by (incorrectly) displaying empty boxes. I have yet to test it out on Emacs and Sublime. From what I understand, the Unicode Consortium will not reassign or rename characters or codepoints, but may be convinced to change character properties like ID_Start/ID_Continue.

The zero-width joiner (ZWJ) is a non-printing character used in the computerized typesetting of some complex scripts such as the Arabic script or any Indic script. When placed between two characters that would otherwise not be connected, a ZWJ causes them to be printed in their connected forms.

The zero-width non-joiner (ZWNJ) is a non-printing character used in the computerization of writing systems that make use of ligatures. When placed between two characters that would otherwise be connected into a ligature, a ZWNJ causes them to be printed in their final and initial forms, respectively. This is also an effect of a space character, but a ZWNJ is used when it is desirable to keep the words closer together or to connect a word with its morpheme.

Most of the below characters express their one-to-many case mappings when uppercased- while others should be lowercased. This list should be split up

Five symbol modifier characters that provide for a range of skin tones for human emoji were released in Unicode Version 8.0 (mid-2015). These characters are based on the six tones of the Fitzpatrick scale, a recognized standard for dermatology (there are many examples of this scale online, such as FitzpatrickSkinType.pdf). The exact shades may vary between implementations. — Unicode Consortium’s Diversity report

Just follow the desired Emoji with one of the skin color modifiers \u{1F466}\u{1F3FE}.

Examples are written in JavaScript (ES6)

Here are some really creative variable names from Mathias Bynes

And here’s some Unicode CSS Classes from David Walsh

If you want to rename all your HTML tags to what appears as nothing, the following script is just what your looking for.

Do note however that HTML does not support all unicode characters.

Here is what it does support:

And heres some basic results

A single TrueType / OpenType font format cannot cover all UTF-8 characters as there is a hard limit of 65535 glyphs in a font. Since there are over 1.1 million UTF-8 glphys, you will need to use a font-family to cover them all.

Exploring Deeper into Unicode Yourself

A map of the Basic Multilingual Plane 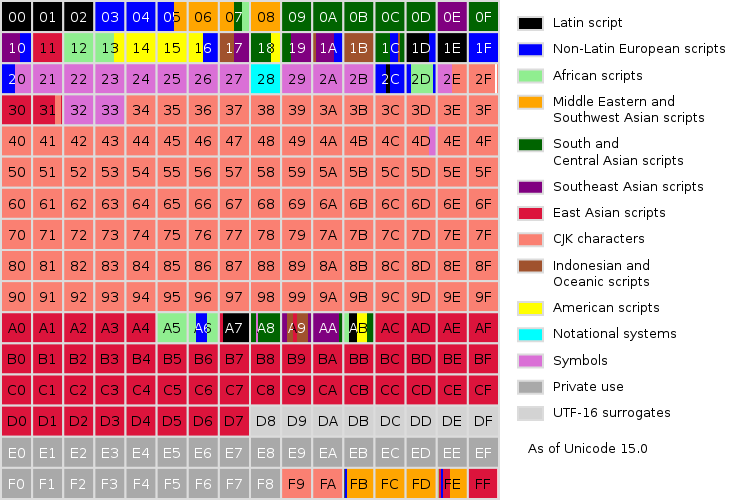 The Unicode standard arranges groups of characters together in blocks. This is the complete list of blocks across all 17 planes.

Principles of the Unicode Standard

The Unicode Standard set forth the following fundamental principles:

Note: Principle descriptions are from codepoints.net