Known as the werewolf cat, this striking breed gets her unusual coat from a natural mutation in the domestic shorthair, which has occurred over the last 20 years in domestic cats. Not to worry: Test results show that the Lykoi’s hair pattern is not from a disease or disorder, and this breed is healthy. The name “Lykoi cat” is Greek for wolf cat.

A new breed of cat, the Lykoi passed to Championship status in TICA in 2016 in the black roan color, which is the show standard. As of 2018, the cats could be shown in the CFA under Miscellaneous Status.

This breed lacks an undercoat and has less hair than most cats. The black roan coat is two tone as an adult — equal parts white and black — although she is born solid black. There may be more coat colors in the future, so stay tuned.

Living up to the name, this wolf cat likes to hunt, along with playing fetch. Loving and loyal, she is very social and likes to talk. She’s an intelligent cat, aware of her surroundings — best for people who like a cat by their side.

Males are larger than females, weighing from 10 to 13 pounds. Females weigh from 5½ to 9 pounds.

These natural oils pool in the ears, so regularly clean them. The oils also build up on the claws and can be simply cleaned off. Nails need regular trimming. This isn’t a hypoallergenic cat. She sheds and can go bald from time to time.

Does well with: Families and other animals, when properly introduced. The Lykoi likes companionship.

Read more about the Lykoi.

Kitten Who Has Been Wandering Outside, Runs Toward Woman Who Changes Her Life Completely 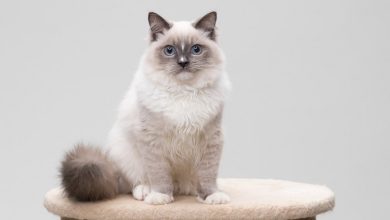 How Strong Is Your Cat’s Memory? 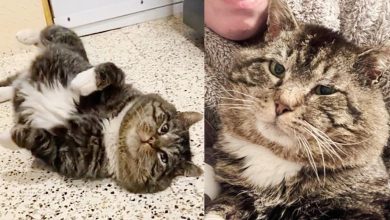 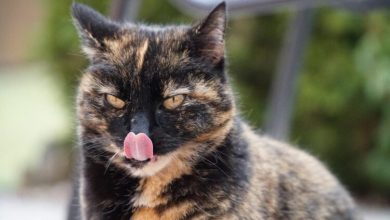 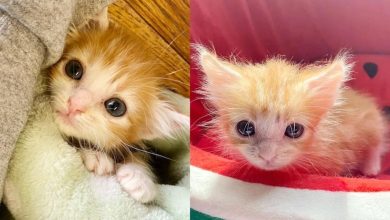