In this article, I’ll first give a refresher of essential OAuth2 notions, then help you set up a complete testing environment on your desktop, and lastly, take a deeper dive into configuring security for Spring RESTful APIs.

Google, Facebook, GitHub, Office365, and many others use OAuth2. Why is it so popular and superior to plain old login/password in each application?

Keycloak of course does all that, but type “OIDC SaaS” in your favorite search engine and check how many results pop up.

OAuth2 defines 4 actors. It is essential to have a clear vision of who is who when you write your Spring configuration:

There are quite a few, but 2 are of interest to us:

This is probably the most useful one. It is used to authenticate end-users (physical persons).

In OpenID environments, the resource server fetches the authorization server configuration from a standard path, either at startup or just before the first request is processed.

The client sends the client id and secret to the authorization server which returns an access token to be used to authenticate the client itself (no user context). This must be limited to clients running on a server you trust (capable of keeping a secret actually “secret”) and excludes all services running in a browser or a mobile app (code can be reverse engineered to read secrets).

A token represents a resource owner’s identity and what the client can do on his behalf, pretty much like a paper proxy you could give to someone else to vote for you. It contains the following attributes at a minimum:

A JWT is a JSON Web Token. It is used primarily as an access or ID token with OAuth2. JWTs can be validated on their own by a JWT decoder, which needs no more than an authorization server public signing key.

Opaque tokens can be used (any format, including JWT), but it requires introspection: clients and resource servers have to send a request to the authorization server to ensure the token is valid and get token “attributes” (equivalent to JWT “claims”). This process can have a serious performance impact compared to JWT decoding.

This token is to be sent by the client to the authorization server to get a new access token when it expires (or preferably just before).

The ID token is part of the OpenID extension to OAuth2 and is a token to be used by the client to get user info.

Scope defines what the user allowed a client to do in his name (not what the user is allowed to do in the system). You might think of it as a mask applied to resource owner resources before a client accesses them.

This is a standard on top of OAuth2 with, among other things, standard claims.

To proceed with the following tutorial, we’ll need an OpenID authorization server with a few declared clients and resource owners. For the sake of simplicity, we’ll use a standalone Keycloak distribution powered by Quarkus.

If you don’t have an SSL certificate for your host already, generate one (read it carefully until the end).

Once you have decompressed the Keycloak archive, edit conf/keycloak.conf file:

You’ll have to define a few valid redirect URLs for the public client (sample below for an Angular application running on dev-server): 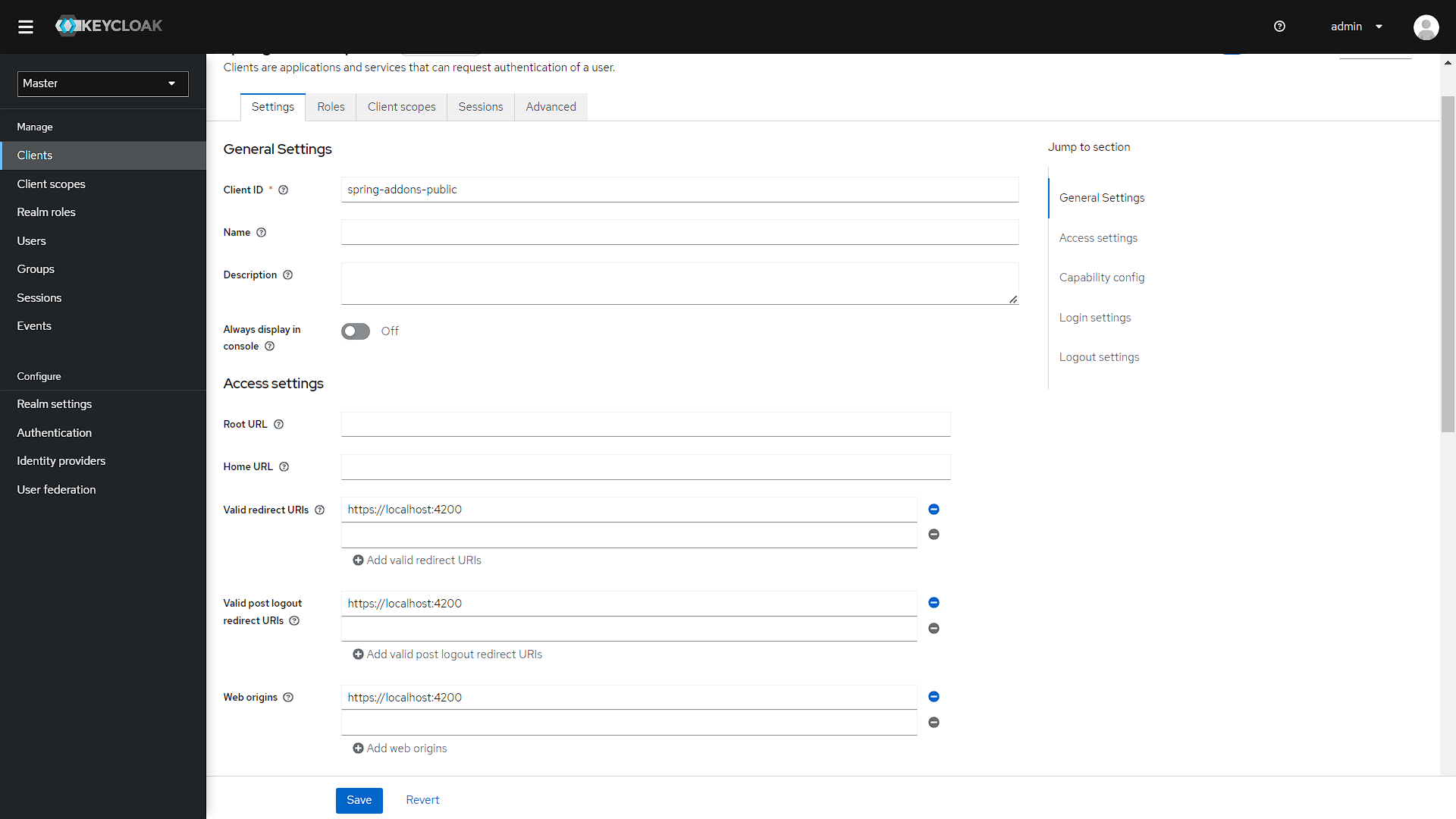 Don’t forget to save after you added the URLs.

Alternatively, you can define roles at the client level. If you’re doing so, also enable the “client roles” mapper from Client details-> Client scopes -> spring-addons-[public|confidential]-dedicated -> Add mapper -> From predefined mappers.

We’ll see that with the help of Spring Boot, we can build a secured resource server in minutes, including security rules unit testing.

Spring Boot provides a library to ease the resource server’s security configuration: spring-boot-starter-oauth2-resource-server. Let’s implement the above requirements with it.

Open Spring initializr and generate a project with the following dependencies:

Once downloaded and unpacked, add the following dependencies:

Now, we can configure web security the Spring Boot 2.7+ way: providing a SecurityFilterChain bean instead of extending the deprecated WebSecurityConfigurerAdapter. This is quite some Java code, but we will see just after how to reduce it to almost nothing.

Of course, we also need a secured REST @Controller:

Lastly, we need a few entries in application.properties:

The application should now run on port 8080 and expose a secured endpoint accessible to brice only.

You can use Postman to get an access token from Keycloak and then send a test request:

The list of features we implemented in the web-security configuration is something very generic we would need in most resource servers. Instead of duplicating this code, we could use one of the alternate spring-addons starters declined in 4 variants for combinations of Web MVC vs WebFlux and JWT decoder vs introspection.

As we wrote a servlet app with a JWT decoder, we will replace spring-boot-starter-oauth2-resource-server with spring-addons-webmvc-jwt-resource-server:

We can now remove almost all of the web security configuration:

Nothing magic here: it is just a Spring Boot module with a few @ConditionalOnMissingBean definitions which provide sensible defaults you can easily override.

As spring-addons sets security-context with a OAthentication<OpenidClaimSet> instance (instead of JwtAuthenticationToken) there is a slight modification to make to our controller:

We saw how to add Role Based Access Control to our Spring methods with expressions like @PreAuthorize("hasAuthority('NICE')"), which make assertions based on the identity and roles contained in JWT access tokens (or exposed on authorization server introspection endpoint).

Let’s now see how to unit-test those security rules.

However, this comes with limitations:

As an alternative, we can add a dependency on spring-addons-webmvc-jwt-test:

It contains test annotations similar to @WithMockUser, injecting other types of Authentication:

The test above becomes:

If you have not applied the “configuration cut-down” above:

So yes, Spring addons can ease your life for unit testing too.

I omitted the client’s configuration. You should pick a lib from certified implementations. I’m personally more experienced with Angular and have a preference for angular-auth-oidc-client.

To learn how to override default @ConditionalOnMissingBean from spring-addons, you might refer to this advanced tutorial which covers:

Allegra's World: It's My 13th Birthday!