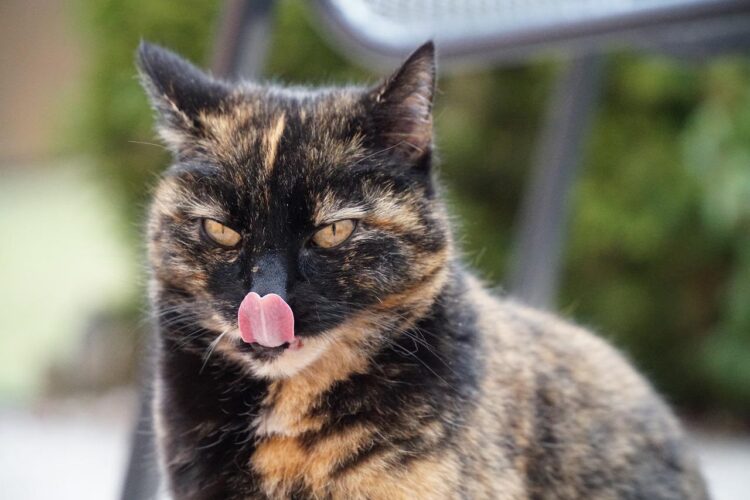 Cat anatomy is endlessly fascinating to me. Cats have some unique anatomical abilities that they share with no other species, and this is true for their tongue as well. That sandpaper sensation is caused by what is one of nature’s perfect designs: the cat’s tongue allows her to groom and to consume her prey.

Anatomy of the cat’s tongue

The cat’s tongue is covered with tiny, backward facing barbs called papillae. These papillae are made from keratin, the same substance that is found in human fingernails. These papillae account for the rough sensation you feel when your cat licks you. They’re designed to help the cat collect dirt, debris and and loose hair from her coat while grooming. They also help the cat pull meat off her prey’s bones.

Alexis Neol, a researcher at Georgia Tech, was so fascinated by her cat Murphy’s tongue that she decided to study cat tongues by creating a model that replicates the tiny barbs. She scanned a specimen of a cat tongue and 3D printed out the structure at 400 percent scale.

Staying clean is a matter of survival

The cat’s tongue is a more efficient grooming tool than any comb or brush. The individual spines are even shaped like miniature cat claws with a very sharp end,” Noel said. “They’re able to penetrate any sort of tangle or knot, and tease it apart.” Noel then put the artificial cat’s tongue through it’s paces inside a machine that drags the model across a patch of fake fur. To clean a traditional hair brush, you need to pluck the hairs out from between the bristles. Noel’s cat tongue model was much easier to clean: She simply ran her finger across the surface in the same direction as the spines. (Source: PBS Newshour)

Even though our house cats don’t have to use their tongues to pull meat off their prey, you’ll still notice them grooming thoroughly after each meal. Post meal grooming is a remnant of cats’ wild origin, where staying clean is a survival strategy: removing all traces of the scent of her meal will prevent other prey in the area to be alerted to the cat’s presence, and will also prevent potential predators from scenting the cat.

Grooming can also be a self-soothing mechanism. Some cats will resort to grooming when they’re nervous or anxious. Unfortunately, this behavior is sometimes taking to such an extreme that they will groom off all their fur on parts of their body. This excessive grooming is also called psychogenic alopecia (alopecia means hair loss). Cat guardians often don’t actually see the cat doing this, they just notice the bald patches. The cause of excessive grooming can be physical or behavioral.

The tongue is also instrumental in helping cats drink. A few years ago, researches at MIT conducted a study into the physical dynamics of how cats drink. They studied high-speed video of cats to show how they flick the surface of water with the topside of the tip of their tongues. According to the researchers, the top surface of the cat’s tongue is the only surface to touch the liquid. Cats, unlike dogs, aren’t dipping their tongues into the liquid like ladles. Instead, the cat’s lapping mechanism is far more subtle and elegant. The smooth tip of the tongue barely brushes the surface of the liquid before the cat rapidly draws its tongue back up. As it does so, a column of liquid forms between the moving tongue and the liquid’s surface. The cat then closes its mouth, pinching off the top of the column for a nice drink, while keeping its chin dry.

Cats have fewer taste buds than humans, and they can’t taste sweets. For those cats that do like sweets, this habit has most likely been created by feeding species-inappropriate foods that are too high in carbohydrates and sugars.

This post was first published in 2017 and has been updated.

These Famous Cartoon Cats Stand The Test Of Time (And Cuteness)

Who Should Get One And Why